"I want girls from any background to believe they can rise up and one day become the leaders and entrepreneurs Malawi needs."

Growing up, Temwa Chirembo and Modester Mangilani experienced first-hand the barriers to quality education, health and sanitation, and entrepreneurial development that many women still face today. As a result of these issues, there is a distinct lack of female leaders for young women and girls in Malawi to aspire to, and women remain marginalised in the community. In order to combat this, Temwa and Modester identified the need for a holistic solution that supports the overall development of women in education, health and enterprise, coupled with mentorship and training to build self-confidence. That solution is their organisation, Ukani Malawi.

Supported by over 200 volunteers, Ukani currently runs a number of programmes focused on female empowerment and gender equality. Programmes include: The Seed Grants Initiative, which provides young women with start-up capital and entrepreneurship training; a young mothers project which aims to integrate teenage mothers back into the school system through financial support and mentorship; and the Breaking Red Project which aims to keep girls in school by training them in menstrual health hygiene management, distributing reusable pads and teaching valuable skills on how to make them for themselves.

It is from the Breaking Read project that their social enterprise arm Bloomkins stemmed, where local women are trained in both practical manufacturing and softer business skills. The women are taught how to design and sew sanitary pads before leveraging their new skills to sell back to the local community and beyond.

QCT is working with Temwa and Modester to provide funding that will be used to expand their current organisational capacity, providing new sewing machines and helping to scale their young mother’s training centre. QCT will also work with Ukani Malawi to provide advice and guidance on organisational areas including safeguarding and financial management.

Continue reading to learn more about Ukani, and hear from Temwa she talks about starting out, her proudest moments and her top tips for young leaders working to drive positive change.

Long-standing systemic gaps in education, health and entrepreneurism prevents young women and girls in Malawi from realising their full potential, limiting their opportunities to support themselves and their families now and access positions of power and influence in the future.

Ukani uses holistic programmes to empower women and girls through education and entrepreneurism. Training in practical tailoring and business skills provide the means for young women to start enterprises of their own, while mentorship and leadership education empowers others to achieve more.

To date, Ukani has reached over 2,700 girls and women, providing 1,500 girls with reusable pads, and supported 80 young women in starting and running small-scale businesses. The organisation has also helped integrate 20 young mothers back into school, and provided mentorship to over 1,200 girls.

"Working with QCT is a true gamechanger for Ukani. We are a young organisation, about 4 years old. QCT will provide us with guidance that will help us to develop and implement robust systems and policies, that will really foster our growth and sustainability."

Getting to know Temwa Chirembo

I am the co-founder of Ukani Malawi (founded in 2016), which is a non-profit organization that promotes female empowerment and gender equality. We look to empower future female leaders and entrepreneurs by holistically supporting their development through the removal of barriers in health, education, sanitation and enterprising. Since 2016, we have managed to reach 2,600 girls and women across 4 local districts.

I am also the co-executive director of Bloomkin’s, a social enterprise that provides reusable pads at an affordable cost to other NGO’S, and which provides sustainable financial support for Ukani’s programs.

I am also a board member of FACE, an NGO in Zalewa that supports young, underprivileged people to be able to live a life of economic independence. Last but by no means least, I am a Mandela Washington and YALI RLCSA fellow, programs founded by the former U.S president, Barack Obama.

I’ve always wanted to be involved in politics from a young age; I knew that I was born to lead and I wanted to serve my people. I wanted to have a seat at the table and make decisions that are for women and by women. It did not take me long to realize that there were few women in politics, and as I began to look closer, this problem spanned across all sectors - from entrepreneurship and business, to health and education. I took time to research with Ukani co-founder, Modester Mangilani, to find out why this problem existed. From our findings it was evident that the reason we have so few women in positions of power and influence, is due to the many barriers Malawian women face in accessing quality education, health, safety and sanitation services. We could see it was not going to be enough to only provide mentorship and leadership training; what was needed was a holistic solution that looked at the overall development of women and girls in Malawi.

I’ve grown up in a peri-urban setting and have had the privilege of going to university, receiving mentorship, and having access to quality health care. This has created an conducive environment for me to grow as a leader and continue to achieve my dreams. However, this is not the reality for most Malawian girls in rural areas where poverty is rampant, and families are struggling to just make it through the day. I do this work because I want girls from any background to believe they can rise up and one day become the leaders and entrepreneurs Malawi needs - but in order to reach that end goal I believe we need to build their capacity and remove barriers that hinder them from achieving this.

When I was 19, I had this dream to start an organization that would change the lives of girls in Malawi but had no idea where to start. A year after starting the organization, Modester and I were approached by a young mother from Ndirande. She told us about the dire situation in her community, where many young mums were staying idle or, in some cases, getting involved in transactional sex just to meet basic needs. At this time, we had no stable funding but decided we had to do something anyway. So we started a new programme focused on sending young mothers back to school. To date we have sent 20 teen mothers back to school but it is evident that there are thousands of young mums in Ndirande in the same predicament. It was clear there was a need to expand the project, but we lacked the finances to do so.

I was privileged to meet an American philanthropist, who was very interested in our work with young mothers, who helped us expand the work we were doing and open a young mother’s center. They later provided funding for us to open a center in 2019 - a place where young mums can call home. In addition to this, Modester and I came up with a sustainability plan called Bloomkin’s, to ensure that the young mum’s center remains open even in times when funding is scarce. Bloomkin’s is a social enterprise under Ukani that provides sustainable solutions for combating period poverty; we sell reusable pads to other NGO’s and the money made from the enterprise goes into financing the young mum’s center.

What challenges have you faced along the way, and how did you overcome them?

We started the organization with only $7 in 2016. Funding has been a real challenge for Ukani, as is the same with many young organizations. We have had to become very creative on how to raise money for our programs and we have achieved this through diversifying our income sources. We conducted targeted storytelling and networking, applied for grants and other small scale fundraising activities to help – but the real turning point came with the launch of Bloomkin’s and the potential that gave us for more sustainable long-term income.

What has been your proudest moment with this work?

Our programs have seen many girls returning and remaining in school, 20 women starting up their own small-scale businesses, and over 1,000 girls access leadership, entrepreneurship and SRHR training. However, the projects I am most proud of are the Breaking Red project and the Young Mothers project. The Breaking Red project has led to an increase in school performance and attendance, through our model that provides training in menstrual health hygiene management, the distribution of reusable period pads and the teaching of how to make them. Through this project, we have managed to distribute 2,600 items and have seen a 70% increase in school attendance among the girls we work with. In addition to this, the Young Mother’s project has sent 20 girls to school and we are currently operating a centre that provides free vocational skills training to young mothers in Ndirande.

Team work makes the dream work. It’s okay if you can’t do everything alone. As young founders we need to be ready to reach out to other people with more experience than us to guide and mentor us. We also need to be able to build strong teams of people we can work with and achieve the vision.

What are your future goals for Ukani Malawi?

Our 5-year plan is to grow the capacity of our organization, to be able to successfully manage bigger grants, and geographically expand our programs from 4 to 8 districts.

The days of young people being leaders of tomorrow are over, we are leaders today. Young people need to have a say and need to be heard, working on developmental challenges that affect us. We need solutions that involve us in a meaningful way as this will have more lasting impact.

What is your top tip for young people who have a great idea, but are wondering how to get started?

Start! Don’t wait until you have all the funding, all the expertise and the technical knowhow. Start where you are and with what you have and build from there. Be ready to put in the late hours and background work that nobody claps for. Refuse to give up, even when the going gets tough - and it will get tough, but as the saying goes, only tough people last.

Working with QCT is a true gamechanger for Ukani. We are a young organisation, about 4 years old. QCT will provide us with guidance that will help us to develop and implement robust systems and policies, that will really foster our growth and sustainability. Aside from this, with funding from QCT, we will be able to upscale the young mother’s project and reach more young mothers in the Ndirande Township. 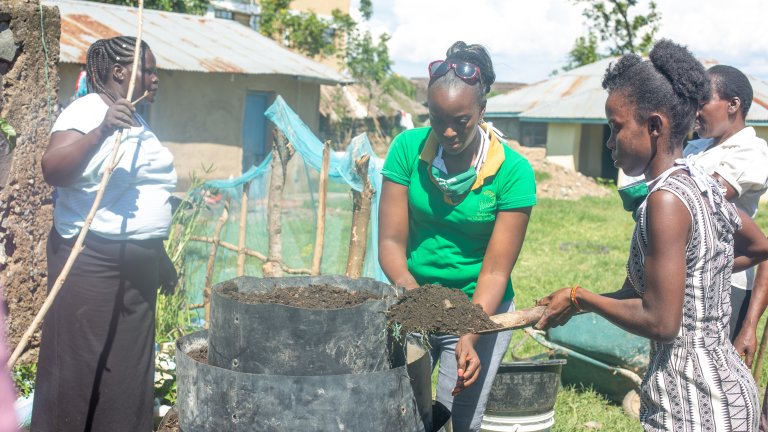 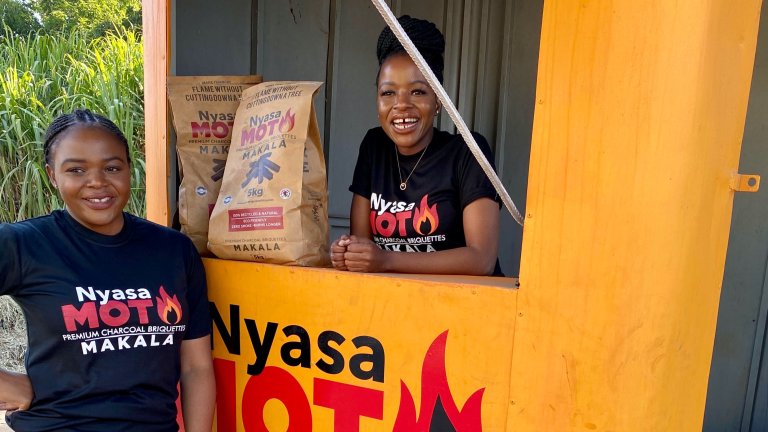 Planet Green Africa works to protect the local environment and improve the health of the community by producing toxic-free, eco-friendly cooking briquettes from recycled agricultural waste. 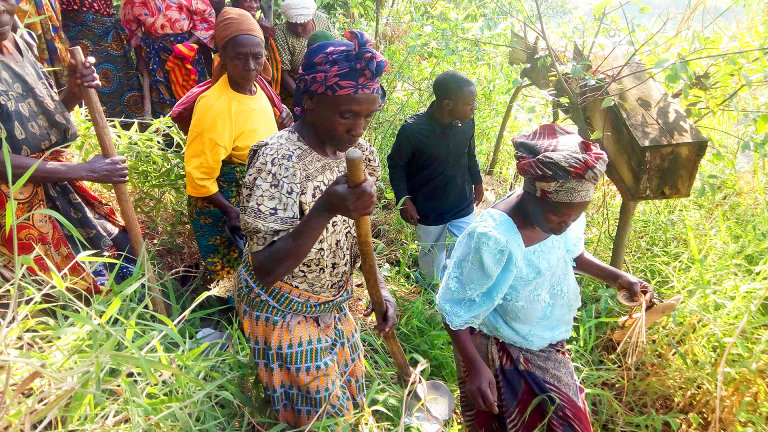